You know that moment when you make a spur of the moment decision to see a movie during the day on your own and it’s a film starring your girl crush Carey Mulligan set in 1870 and you walk out feeling all proper and lady like.

And then you catch yourself checking out a really hot blind guy with a really big cane.

And you feel perhaps you’re not as ladylike as you had previously thought.

It’s so strange how quickly music and images can change your mood and make you feel like a whole different person.

It’s lovely though isn’t it.

Listening to different music and feeling different because of it.

This of course doesn’t always work to your advantage.

The shuffle on my phone is contaminated and can’t be trusted due to the large volume of Christmas tunes and Afghani lute music in my library.

But the songs that take you somewhere else and make you feel something else are magical.

Songs from your childhood.

Songs from places you’ve been and places where you felt something.

I don’t know much about music but I know what I like and what I feel.

And I always dance like nobody’s watching… especially when they are. x

And now some unsolicited and completely unsound financial advice.

My kids like to play Monopoly or Bonocoly as the 5 year old calls it.

(Should probably have his ears and speech tested.)

I kind of like how it teaches them that you need money to pay for things and that you have to sell and mortgage properties when you run out of money and pay fines etc.

The thing however that I hate about Monopoly at the moment and it seemingly haunting me is the card that you pick up that says “Bank error in your favour. Collect (however much it is).”

I have recently had 2 bank errors NOT in my favour.

However… one was completely my fault.

It resulted in what turned out to be the unintentional purchase of a $42 packet of peanuts from a 7/11 store.

Let me explain because I can tell from the tone of your listening that you’re curious.

I was in the city taking $40 out from the ATM when I was distracted by the wall of nuts. I was away from my son who is allergic to nuts so I went a little crazy and decided to buy the $2 peanuts.

Unfortunately for me I made this purchase in between removing my card and taking the money out of the machine and by the time I realised this the machine had sucked my money back up.

Damn. A phone call later and it should be returned in 5-10 business days. Blah, blah, blah.

The other bank error occurred when I bought a beanie last week and I used the tap function thingy on my credit card but somehow (and I only noticed this several days later) that it must have tapped twice.

So let me reiterate that Monopoly lies.

It is not real life.

Nobody is getting bank errors in their favour. They are getting recorded messages when they call the number on the back of their cards and options that aren’t relevant to $42 peanuts.

It’s a board game people!

*Please note this advice is free of charge and comes from someone who took and passed Economics in Year 12 of High School.

*Please also note that this advice is from a 36 year old woman who only recently discovered that when they say a 90% chance of rain on the weather forecast this does not mean that it will rain for 90% of the day.

But you’re all here together, sharing the ride.

That means you need to think about each other for a moment.

Nothing deep and meaningful, just a quick thought about whether or not you’re sharing your music with someone who really doesn’t want to hear it.

Or if someone needs a seat more than you.

Or maybe you’ve drifted off and put your feet on the seat without thinking about the person who might be too scared to ask you to move them.

That little thought can make a big difference to everyone here, including you.”

The above message was displayed in a rather sexy font on a train I caught yesterday on the way to the footy in Perth.

(We will not be mentioning the footy or my teams appalling performance again.)

It made me think. Firstly what a nice way to remind people of how to behave on public transport.

Secondly is how this applies to life.

We’re all here together. Let’s make a small effort to think of others not just ourselves.

We used to be more considerate I think.

We used to think of others before ourselves.

But maybe not so much now.

It’s all about being served first.

Letting everyone know when you weren’t served first and why it’s not fair.

Anyone with a 5 year old will be able to tell you that life’s not fair. It’s not meant to be. It never will be.

And that’s why we need to think of others.

G’day from however many thousand feet up my plane is flying right now.

I’ve been watching the sunset with bright orange, yellow, pink and blue hues for the past hour now so I must be heading west.

I have a friend that I sometimes message when the sky is nice. There would be no hurry tonight. This sky is staying for a while longer.

The clouds below me look like shaving foam or something that you could touch and leave a mark on you.

I touch a cloud once as I was about to jump out of a plane that didn’t have a door. That was kinda cool. But the clouds are just like thick fog. Nothing you can keep.

I’m flying business class and there’s a spare seat next to me so basically this is about as good as it gets.

After 30 minutes I worked out the headphone system with the iPad.

I drank a sparkly drink before take off that may not have been as innocent as I first thought.

I’m rugged up with the blanket they provide and it’s so damn soft and I’m so relaxed and not feeling guilty at all about being away from my family again…much!

My mum will pick me up from the airport because she lives in the West now. She’s going to take me back to her new husbands house where I will blame the time delay (only 2 hours) and go to bed.

It won’t be the same mother/daughter time that I’m used to with her but life changes and she’s happy and I’m strong enough to go with the flow.

I’m also going to catch up with my beautiful friend from Mothers Group that I haven’t seen for over a year or more. Can’t wait to hear her lilting accent and spend time with her beautiful soul.

I am on a holiday.

Hope you have a good weekend too. xx

P.S Due to aviation rules and regulations this post was not actually posted in mid air but on the tarmac with my seat belt tightly fastened. 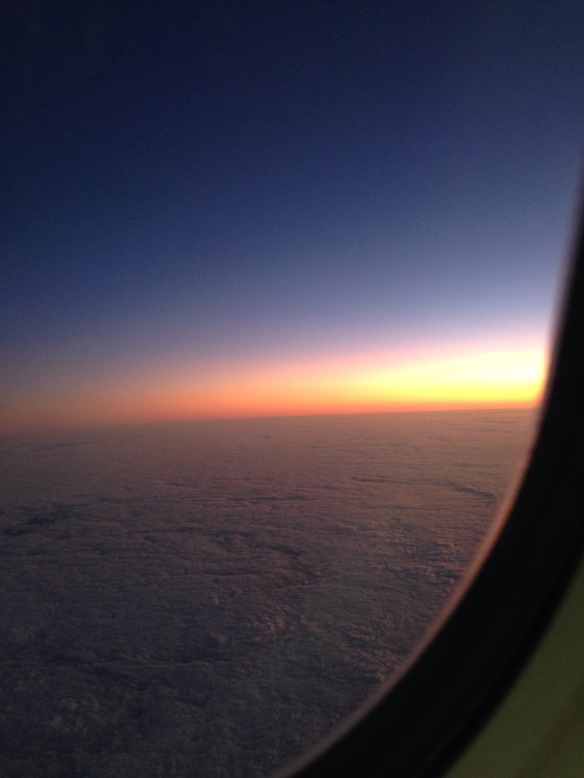 Hey there! Guess what?

Remember that conference thing I was really anxious about in the last post? Yeah well I totally rocked it.

Well as much as anyone can “rock” a 3 day course on how to observe and document children’s learning.

I was on the cool table.

Or was it cool because I was on the table? Who knows? (I mean I’m obviously being modest here right?)

I learnt a lot.

I had a chilli hot chocolate after lunch each day.

My “power outfit” on the first day of my black pants with the zip on the side and my tight red top really wowed them. Or alternatively it wasn’t too dressed up but considering the presenter wore croc thongs each day maybe the bar wasn’t set too high.

I loved being in the city with all the gorgeous well groomed women wearing their running shoes in the morning.

I welcomed the opportunity to drink really good coffee each day and even bonded with the baristas.

(Bonded/stalked it’s such a fine line.)

I walked past shops and offices and people working in a very different world to the one I’m accustomed to.

I may or may not have accosted 3 lovely tourists from Romania who were looking at a map. I shared my insider knowledge with them. Whether they wanted it or not. Actually come to think of it they did kind of run off in the opposite direction than I told them to go.

I amassed a collection of 20+ pens from the venue because if you can’t steal office supplies from a conference then why the *rude word* are you there anyway?

I think I’m too friendly for the city. I smile at strangers and sing along to the music in my headphones.

I missed my kids. That was nice. They missed me too. I can tell because they keep being nice to me and accidentally calling me dad.

At the end of the course the presenter gave us hugs and told us all to stay in touch.

I took a leadership style test and it turns out I’m a nurturer which would explain why I went and bought pastries for the guy who slept in this morning and missed breakfast.

But the best thing is that for the last 3 days I’ve spent so much time talking about kids but no time with kids.

And now I’m back to reality. A 3 day long weekend with the family before my husband goes away again.

My mini break has drained my brain and now I’m ready for hugs and demands for food… and that’s just from my husband. x